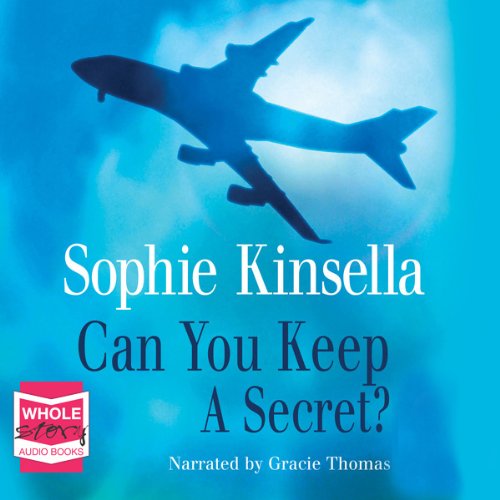 Meet Emma Corrigan, a young woman with a huge heart, an irrepressible spirit, and a few little secrets: Secrets from her boyfriend: I’ve always thought Connor looks a bit like Ken. As in Barbie and Ken. Secrets from her mother: I lost my virginity in the spare bedroom with Danny Nussbaum while Mum and Dad were downstairs watching Ben-Hur. Secrets she wouldn’t share with anyone in the world: I have no idea what NATO stands for. Or even what it is. Until she spills them all to a handsome stranger on a plane. At least, she thought he was a stranger.…Until Emma comes face-to-face with Jack Harper, the company’s elusive CEO, a man who knows every single humiliating detail about her…

Do you know the saying: “insanity is doing the same thing over and over and hoping for different results”? Well that seems to be me at the moment. I’ve listened to a lot of Sophie Kinsella’s books as audio, after falling in love with her writing in I Owe You One. But fact of the matter is, that most of them have left me shaking my head, sighing and thinking to myself: “I’m too old for this sh**”. When I finished this one I was ready to give up on Ms. Kinsella, until I sat down to write this review and noticed an important detail. All the books I haven’t liked/loved are written earlier in her career. Now I’m by no means an expert on her writing but going through reviews and other bloggers posts, I’ve noticed people say she changed writing style around 2013-2015. So, it really looks like I need to take those years into consideration. For some reason her previous work just doesn’t work for me.

Emma Corrigan is extremely unsophisticated, not open at all, anti friendly and more about “how can I use the people in my life”. She lives in a world where when she can’t cope and things aren’t to her liking (which is often), she lies and go behind peoples backs to get what she wants. She lies so much that no one really knows the real her. Instead of saving up to buy the things she likes and wants, she takes them from her roommates closet when she isn’t home. She expects a promotion at her yearly appraisal at work, just because she’s her. And when she does one thing that turns a profit for the company she works for (one in the entire book), her first thought when her boss praises her, is to demand the promotion she feels she’s due. I don’t know if this is meant to be funny?? But As someone who lives in the real world, I just don’t find that cute or funny at all.

When the man Emma spilled all her secrets to, outs them all on national TV the jig is up. Her friends, family and colleagues suddenly know it all. How she’s used them, lied, manipulated and managed to make their kind gestures a complete joke. For me this could have been a great redemption point for Emma! Had she come clean, and apologised I might have even liked her. But she doesn’t!! She tries to cover herself with more lies, and when that doesn’t work, she just says nothing. Personally I don’t really get why she still has any friends left. I sure as heck wouldn’t have kept her around. But I was more disappointed that this wasn’t used as a character growth experience, and instead used to reward her for all her lies.

As for Jack Harper… the mysterious man from the flight and CEO of the company Emma works for, I don’t understand why he gets so much heat. Sure he’s not the most forthcoming person, and yes he does out all Emma’s secrets… but nothing is done with ill intent. He’s just a very private person, with a very big mouth. My issue with him is that he’s boring. There’s nothing interesting or original about him. I guess that does somehow make him the perfect match to the chaos incarnate that is Emma.

I think I’ll be on a Sophie Kinsella hiatus for some time now. There’s only so many disappointments one reader/listener can take, before moving on to finding other authors!

Have you read this book, or any books by the author? Who’s your favourite RomCom/ChickLit author? Let’s talk in the comments!

4 thoughts on “Audiobook review: Can You Keep A Secret by Sophie Kinsella”