Today’s theme is: Outrageous/Crazy/Uncharacteristic Things I’ve Done for the Love of Books. Uh-oh… it’s time to dig deep into the pit of moments, I’d rather forget about. Hang tight and be prepared, this is not going to be pretty!

Yep, you read that right!

Back when a new Harry Potter book was released every year, the book shops in Denmark had a special midnight theme opening. That way people could purchase the latest instalment in the wizard series, just as it released at (you guessed it) midnight. I was really into the books, and partying at the time. So I convinced one of my friends to give me a lift, on her scooter, to the launch party at 11.30pm. Thing is we were already at a party, and really drunk. But we still managed to get there in one piece. I don’t remember much from the drive, but I have a feeling we looked something like this

The outrageous thing? My friend thought we were just picking up the book, and then going clubbing. But no – I left her, and went home to read my new book. It did take her a few months to forgive me for that one, but to this day I regret nothing!

Yes, I’ve been guilty of taking longer toilet breaks at work, just so I could finish a chapter. That haven’t always went over well, actually often not at all. Especially not when I worked for a contact centre in Bournemouth, and our toilet breaks were monitored. Once I got called into a meeting with HR, because I’d been in the toilet for 25 minutes. In my world the outrageous part is monitoring peoples time in the toilet, not spending that time reading – and if they didn’t want people to read out there, why was there a bench to sit on in one of the stalls? I’m still wondering about that. But needless to say, that’s not what I told HR.

There comes a time in most readers life, where one has to choose between sleeping or find out what comes next in your book. This has happened to me more times than I can count. It all starts out well; I read on the sofa, stop early so I can go to bed, continue reading while getting ready for bed. Then as the sensible person I am, I decide for only one or two more chapters…… next thing I know it’s 4am and only 2 hours till I have to get up. Whenever that’s happened I’ve usually just gotten up, and went to work with no sleep. Those days suck so bad, but not enough to not make it happen again.

There’s been occasions where I’ve been invited to some kind of social event, and then lied and said I had other plans. Just so I could stay at home and read. For some reason that doesn’t count as a good excuse to everyone, so sometimes I’ve found it easier to just lie.

Many years ago I worked in a tanning salon. The job was simple enough, I just had to clean and be visible, so I could assist customers with change and advise on new machines. One day I was really into my book, so I hid in the backroom for my entire 4 hour shift. I just sat there and read. Well almost my entire shift. The security cameras was only places in the common area, not in the back and not in the rooms with the tanning booths. So I did gather cleaning supplies, put a “closed” sign on the door, walked into the rooms and sat there reading for 20 minutes, making it seem like I was cleaning.

I’ve called in sick once when I lived in Barcelona, so I could go to this multilingual book shop. There was an event and huge discounts. I considered whether or not to try and book the day off as a holiday, but that needed to be done one week in advance – and I only found out about the event two days before. So instead of risking it, I just called in sick.

I have literally thrown shoes, clothing, and household goods away, in order to fit more books into my suitcases when I’ve moved from one country to another. I’m sure I’ve thrown like £300 worth of clothes away, to fit my books. When I moved from Spain back to England I did have to leave a few books behind, and almost six years later, I’m still sad about that.

When I was younger I was known at the local library, where I’d visit and sit and read for hours at least three times a week. They knew me so well, that when it became time to discard and sell old books, they’d put them aside for me, so no one else could buy them. This nice gesture led me towards my first debt. Because they allowed me to just add the purchase amount to my billing account, and pay it later. That meant that my dad’s wife got a few surprises along the way, when she was there with me and was asked to pay. Luckily, it was only small amounts, like £10 for 15 books – but because they never asked me if my parents were okay with it, I could easily run up a big tab in no time. 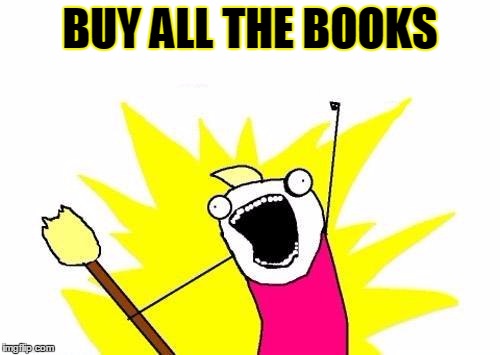 Before the E-book’s were invented I would go everywhere with three different books in my bag. When I was in school, it was three on top on what I needed for classes. This wasn’t just extremely heavy, it was also the death of many bags. Both school bags, and pretty handbags. But I still had to have my books with me.

I LOVE food! Anyone that knows me, knows I am a huge foodie. Yet, if I’m really into a book, I’ve been known to skip a meal or two, just so I don’t have to stop reading.

Did you do your own Top Ten Tuesday post? If so, feel free to leave your link in the comments and I’ll check it out 🙂 What’s the most outrageous/crazy/uncharacteristic things you’ve done for the love of books? Let’s talk in the comments!