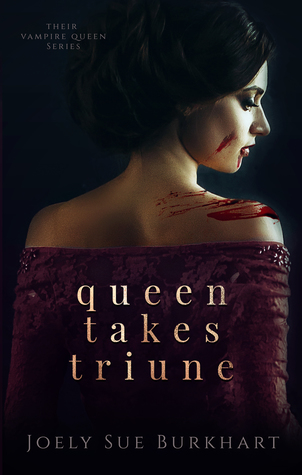 Published: the 30th of March 2019
Written by: Joely Sue Burkhart
Series: Their Vampire Queen
Length: 315 pages
Source: Free copy generously provided by the author and then purchased through Amazon UK.
Disclaimer: I was lucky enough to BETA & ARC read this book, and received a free copy in exchange for my honest review. However, please note that all opinions and views are my own and I purchased the book myself after it was released.

Which Triune court is calling the last Isador queen to take her rightful seat?

There are three Aima courts: one dead, one full of monsters, and one with an empty seat that’s ruled by the queen of Rome. While Shara Isador loves her monsters, she has no plan to unseat a Skolos queen. Nor does she wish to work side by side with Marne Ceresa on a daily basis.

Let alone the mysterious Dauphine, who might be closer than Shara ever suspected.

Shara might be a relative baby in Aima years, and she wasn’t raised in a nest. She doesn’t know the ancient houses or laws that bind the queens to the high courts. But there’s one thing she knows beyond a shadow of a doubt.

What this queen takes, she loves, and what she loves, she keeps for all time.

Goddess help anyone who thinks to harm one of her own in order to sway her decision.

This is it you guys, the moment I’ve been waiting for and dreaded for months. This is the last book about Shara and her harem of monsters. Though, the series will live on with different leading ladies, this is it for Shara. To say I have mixed feelings about this is an understatement. On one hand I wish I could live in her world forever, on the other hand, Joely gave her such a perfect sendoff in this book, that it would be a shame to continue. But I would be lying if I didn’t admit, that I am hoping that the last daughter of Isis will make an appearance sooner or later. Either in her own book, or in the spin-off’s that Joely is continuing in the Their Vampire Queen series.

I only joined Joely’s beta team about half a year ago, and as some of you fellow bloggers know, beta reading can be a lot of work. But for this author it has been an amazing experience! Having a front row seat to see how carefully she chooses every word, and how passionate she is about her story, has been nothing short of awe inspiring. When authors write series that are 4+ books long, I find that they often loose sight of the smallest characters. That couldn’t be further from the case here. Joely makes sure that everyone gets a proper send off and has a role to play in the upcoming battle!

Shara-fucking-Isador has been through a lot! From being on the run from creatures, to now inviting selective, fierce and legendary monsters into her heart and bed. With the blood of two powerful gods running through her (Typhoon and Isis), this queen seems almost unstoppable. Though Shara would love nothing more than to spend every moment naked with her Blood, there’s no rest in sight. Now that she’s defeated Ra, killed the former queen on New York City, helped the legendary Gwen chase of Arthur – it’s only a matter of time before she’ll receive the call from the Triune. Powerful as she is, that’s no guarantee of survival. Especially now when the rival queens have years of experience in court games, and are ruthless in their attempts to keep their secrets.

Throughout the book Joely managed to tie up loose ends, make sure every question is answered – while also providing a lot of new information. I love the dynamic between Shara and her Blood, and I was happy that she finally got her raven out of the shadows and into the spotlight. I felt like I got a new understanding and appreciation for not just Shara, but also for the other queen’s. Both Dauphine and Marne proves formidable foes, and I was glad to get to know them both a bit better. Especially the queen of Rome is an interesting character! I kept walking the line between feeling sorry for her, admire her and hate her. But one thing is certain: knowing the rules for Chess isn’t necessarily going to help in a game of Hearts.

So, here’s to the former virgin Queen, may she finally get some much deserved downtime.

WARNING: This book contains detailed sex scenes, along with a strong adult language use, so I wouldn’t recommend this series if you’re easily offended. If not, I personally think it suits the world created here, and I don’t find it cheesy or forced!

Have you read this book or any of the others in the series? Does it sound like your kind of book? Let’s chat in the comments!