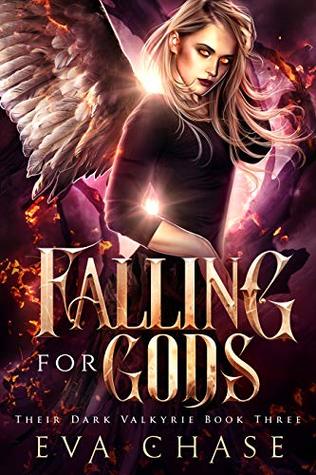 Who would have thought I’d need to die to really come into my own? But with my growing valkyrie powers and the scorching hot Norse gods who resurrected me by my side, I’ve never felt more alive.

If only I could take a moment to enjoy my new home in Asgard. Unfortunately, our recent triumph has enraged a power-hungry giant who wants to see me dead all over again, along with everyone and everything I care about. And then there’s our newly returned leader… Odin has turned out to be as single-minded as he is single-eyed, and I can’t shake the feeling that there’s more to this situation than he’s letting on.

My four gods and I will have to depend on each other if we’re going to find our way through this mess, even if opening my heart that much to anyone terrifies me. I’ve come this far. No way am I backing down now.

*Their Dark Valkyrie is a medium-burn reverse harem urban fantasy series. This action-packed, heart-wrenching ride gives you a kickass heroine, four irresistible gods, and Norse mythology like you’ve never seen it before.*

It’s been a long time since I’ve been back in Valhalla, with Aria, her godly harem, Freya and now Odin. After Aria and her harem rescued the Alfather from his imprisonment, they should feel on top of the world and be united. However, due to Muninn’s mind games and illusions there’s unaddressed tension amongst the ranks – and no one seems to want to rock the boat, by demand answers from Odin. This still leaves Loki as the outsider, and its up to their Valkyrie to keeps the troops together. On top of that, after returning to Valhalla, Odin is quick to return to his high seat and assume his position as leader of the Aesir’s. With it he resumes to the old days before Ragnarok. Without being willing to listen to the council the others have to offer, he’s distancing himself 100% from his sons, wife and the one Valkyrie he never created.

For the most part of this book, it seems that everyone is focusing on solo adventures and redefining themselves. This is both good and a bit confusing! It’s cool that Eva Chase allows so much room for each of the main characters, that they can venture out on their own and grow. But at the same time, it makes it seem like everyone is suddenly more conflicted than previously seen. It also makes

6 thoughts on “Falling for Gods | review”