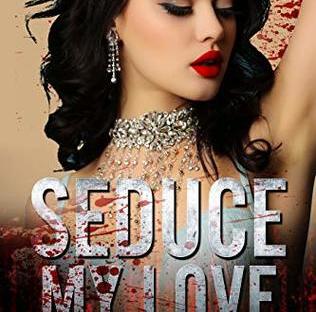 My rating: 4 of 5!
Published: the 20th of January 2019
Written by: Yumoyori Wilson
Series: Bloody Desires
Length: 190 pages
Source: Free copy generously provided by the author.
Disclaimer: I was lucky enough to receive a free copy of this book, in exchange for my honest review. However, please note that all opinions and views are my own.

The seduction in my veins not only brings me two loving mates but opens the path to a third lover who holds knowledge and power. Will it help me rekindle a broken bond with a family member or lead me astray when the tension between races thickens?

Being a private secretary to NYC billionaires proves to be a lot easier than expected. It becomes even more interesting when I get to add a third individual who loves bacon more than anything and is NYC’s third billionaire.

As I continue my MIA status with my job, my focus is centered on becoming stronger as a triple hybrid. My limits will be tested and so will my identities as I, Anastasia of Last Resort, have to face parts of my past that I’m not ready to confront.

Unknown enemies are lurking around the busy streets of NYC, and their new target? Me.

With new challenges coming left and right, it’s going to take the help from Liam, Brian, Pixel, and a new arrival to help me survive. As for Alexander? Maybe my decision was for the better.

It’s time for me to prove what I can do, and as long as my cacti are watered with some extra TLC, these new enemies will wish they never picked a fight with me.

Will I be able to seduce my way out of this? Or will the seduction in my blood turn sour?

Sia’s dad has re-appeared and wants to be part of her life. With his arrival comes a flashback about how brutal and horrible, Sia’s mother treated her. Rape, torture and mental abuse was basically all Sia knew. In her flashback we learn that Sia’s father did come to visit, and when he say his broken daughter he promised her, that there wouldn’t be anymore rape. But he didn’t put a stop to the rest of her mothers favourite past time activities, like beating her senseless, shooting her and last – but definitely not least – injecting her with deadly poison. All in the spirit of making her invincible. Go mum! For unknown reasons Sia wasn’t be able to remember her dad’s visits once he left, and this part was annoyingly never explained! What he did try to explain is why he left her with her mother, and honestly I’m not sure I even understand why he did so. Apparently it was for her own good (ha!) to keep her away from shifter politics, and to avoid his enemies capture her and use her.

In my reviw of Seduce My Soul I mentioned that Liam and Brian seems to be moving backwards, when it comes to maturity. Or lack thereof. In this book it was the same with Sia. The confident succubus we met in the first book, is long gone. She’s reduced to a teary mess, who constantly feels that everything is her fault. The best part of this book is Pixel. He is hands down the most interesting character. He doesn’t have iceberg sized chips on his shoulders, he’s just happy to be with Sia – and he is very respectful of Liam and Brian. Alexander… well unfortunately he made a comeback, and I’m so annoyed about that. His reason for staying away is ridiculous, his parents way of manipulating him makes ZERO sense. I mean, trying to force him into mating with a submissive wolf… the omega to his powers, I just don’t buy it.

Despite all of the above this books was really good. The first 55% was not really of any importance, and it did almost act like filler parts. The last 45% brings the bacon home, and is hands down worthy of a 4/5 rating on its own. There’s love, intrigue, heartbreak and death. I’m not a fan of killing off the main characters – and don’t worry that’s not what happens – but I did wish that I had been more invested in the person who dies. And I did think it was kind of insulting that the death was overshadowed by Sia. But all in all this is still a great read. I don’t know what Yumoyori’s plans are with this series, but it finished on an interesting highnote and with the famous words “to be continued” – so I hope to be able to read more soon!

Have you read this book? How do you feel about characters that strays too far from the personality they had when you first “met” them? Let’s chat in the comments!

4 thoughts on “Seduce My Love | review”