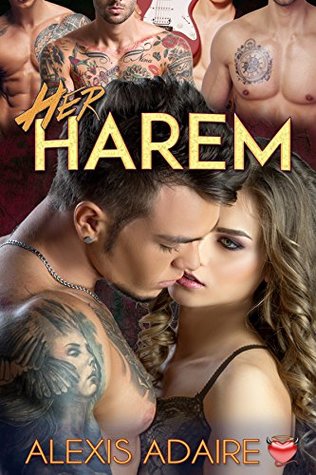 When image rehabilitation expert Kelsey Lambert is called in to help save the reputation of world-famous rock band Harem, falling in love is the last thing on her mind. After all, her career’s on the line, and keeping untamed musicians out of trouble is a massive undertaking. But when the gig puts her on a tropical resort island with the sexy, unrepentant bad boys, she struggles to remain professional as her inhibitions rapidly melt away. Although getting romantically involved with five rock stars at the same time was definitely NOT part of her business plan, Kelsey soon begins to realize she’s fighting against the very thing she craves most. She was sent to save Harem, but maybe they’ll end up saving her.

Her Harem is a steamy reverse harem romance with scorching graphic sex scenes and a deliciously happy ending.

“Alexis Adaire is the queen of strong female protagonists and Kelsey Lambert is among her fiercest and sexiest!”

I think this is either one of the (unintentionally) funniest or most tragic books I read in 2018. The book is about a “professional” image coach who is anything but professional. The whole book is about her trying not so hard to not have sex with the entire band. She does EVERYTHING and anything to insure that they do in fact have sex and make out. A lot.

He’s trying so hard not to look at my tits, it’s adorable. His innocent expression contrasts with his hot, ripped body.

As an image coach to the stars I was surprised by how much she acts more like a groupie than a professional. She can’t even have a conversation with the band without mentioning how sexy they all are. Like that isn’t enough, she keeps thinking about how her past self wouldn’t believe she would get the opportunity to make out with the entire band. A title and profession like professional-star-fucker would have been more like it, and probably provided a more believable and bearable plot line.

Who cares whether or not the guy can actually play an instrument, as long as he’s sexy. Right?

Just because I do have issues with not knowing how things end, I will be reading the sequel too. However, I don’t have any expectations to it – except that I’ll be rolling my eyes a lot.

Have you read this book? Or any book(s) by either of the authors? Do you think you’d give this one a try? Let’s talk in the comments!

4 thoughts on “Her Harem – mini review and rant”