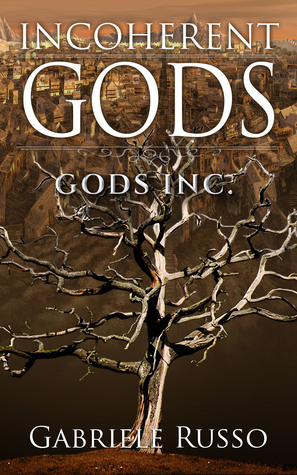 My rating: ❤❤❤❤ of 5!
Publisher: Fiery Seas Publishing, LLC – the 13th of November 2018.
Written by: Gabriele Russo
Series: The Gods Inc. Series
Source: Free copy generously provided by the author.
Disclaimer: I was lucky enough to ARC read this book for Gabriele Russo, who generously sent me a free copy of her book, in exchange for my honest review.

Hercules, guardian of the Lemuria Zoo, has a big problem: the Zoo’s divine animals have been going crazy. To make things worse, Queen Louhi, the CEO of Gods Incorporated, has just arrived for her yearly visit… with a new fiancé in tow (along with his yenta-minded grandfather Jupiter). Of course, the fact that Hercules is desperately in love with her doesn’t help his plight in any way whatsoever.

His attempt to cover up the situation quickly blows up in his face and they finally realize the animals’ madness is caused by artificial means. Cue in the bodiless god Mimir, who reveals that the real target of the mind-altering poison is Yggdrasil, the World Tree.
​
And if the Tree loses its cohesion, then so will the barriers between the worlds, crumbling the foundations of reality. Who in gods’ names could be crazy enough to want to do something like that?

Gabriele Russo, AKA Lucie-Gabrielle Jolicoeur-Rousseau, was born in Quebec City amidst a family of book lovers – her father had dreamed of being a writer and both of her brothers are published authors.

Since she earned her Bachelor’s in History, it was no surprise (except to her) that she ended up working in restaurants, eventually owning two, which almost drove her mad. She sold them and was nursed back to pseudo-sanity by Douglas Adams and Terry Pratchett.

That’s when she answered the family calling and decided to write. Armed with her ideas for the Gods Inc. series she went back to the University and got her Master’s in Creative Writing.

She now lives with her husband in Culpeper, Virginia, where she divides her time between painting, ripping apart and reconstructing her recently bought historical home, playing tennis and, of course, writing more books.

About 2 moon cycles ago I was contacted by Ms Russo herself. She wanted to know if I’d ARC read her book, and participate in the upcoming book tour for her INCOHERENT GODS.
I’m always really flattered when authors reach out to lil’ me, and thought why not try the tour and see what it’s all about.

Not long after I received an email from the publisher with the blurb, banner and some info about Gabrielle. Other than that there was no instructions. Believe you me, the lack of instructions stressed me out way more than it probably should have done. But I’ve been wracking my brain trying to figure out how to deal with this task I’ve taken upon myself. In the end my boyfriend got tired of hearing me sigh, type and delete and he said: “the author reached out to you, she must like how and what you have to say. So just be yourself”.

So here’s hoping he’s right, and here we go!

To someone like me, who love Greek Mythology  I expected this would be right up my alley, seriously I almost expected it to be a slam dunk. And while I did enjoy the goofy aloofness and lighthearted characters, it did at times feel like they all lacked depth. The divine forces seemed more like shallow teenagers, than ancient beings. To me it was especially that part that let me down. However, at the same time that’s the exact parts that had me laughing and giggling to myself.

While I missed more subsistence in the characters, I’m amazed by Gabrielle’s imagination. The world building is amazing and while I don’t think the book is spectacular, it’s quite entertaining. And therefore I will be reading the other books in the series, and I feel that the 4 heart rating is fitting.

Do you like Greek Mythology? Or any kind of mythology? Do you like to read about different beings? Let’s talk in the comments!