You guys, this is probably my most surprising 4 heart rating of 2018, and just for kicks, I used pawns instead of hearts. – just coz’. You might ask why the rating came as such a surprise to me, and in order to explain it, we have to go back in time. Till the 27th of July of this year, and look at another bloggers review. The review Sara wrote about the Pawn was so funny, that I had to one-click this book and see for myself.

And you know what, the joke was on me!

This is the story of Avery the virgin and  Gabriel Miller. This complex, dark and mysterious man has his own demons, and runs hot & cold more times than Katy Perry can repeat the chorus of her hit song. Avery, who’s daddy have cheated, lied and stolen money from (what sounds like) every rich and powerful man in their local area, have went from a life of luxury to one of poverty. As a thanks for all her daddy’s deceitful deeds, he’s been beaten within every inch of his life, and now needs 24:7 care. As they’ve lost everything, Avery has no money to pay for the care, and instead undertakes the nursing duties all by herself.

Avery’s mum committed suicide years ago and even her fake uncle, is not interested in helping (though he later on “kindly” offers to help, if she marries him. So exactly what you’d expect from an old and pervy family friend. Avery declines but quickly learns that desperate times call for desperate measures, and Avery is going to the bank, intending to ask for a loan. But with her family name being dragged through the mud, that’s not really realistic. Instead, as a way of earning money, she ends up agreeing to sell her virginity at an auction. The terms are simple: the “gentleman” who wins, gets Avery for an entire month. On top of paying whatever the winning bid is, the winner also have to pay for care for her dad, for the month.

When Avery is being prepped for the auction, by one of the trophy wives, she receives a valuable piece of advise:

The way she leans close to me is almost regal. Her lips by my ear, she whispers, “All you have to give them is your body. Your mind, your soul- that’s your leverage.” That’s my ball of string, I realize. A lifeline, so I can find my way out of the maze at the end. She was playful before but dead serious at the end. Because this is life or death, my ability to move on from this. It could devastate me. It could break me.

At the auction we re-meet Avery’s pervy and fake uncle, who calls her a whore, just before bidding on her.

Revenge, deceit, intrigue & passion… make your first move because in this game the stakes are high, and the winner takes everything. 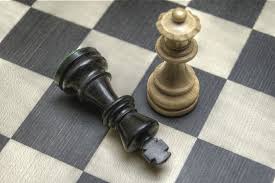 As I’m writing this review I’m having a hard time formulating it in a way, that makes it come across just how intriguing I find this book. But its hard! Even with the spoilers, I still don’t want to give everything away. And even if I would, I’m not sure I could. Because there’s a lot going on, on so many different layers. I mean seriously, its like an onion or one of those Russian dolls. You peel away one layer, just to have 15 new ones revealed. But I think what this romance and mythology obsessed bibliophile enjoyed the most, is the mixture of the both. That’s right, you  read me right. Back when Avery lived a life of luxury, she was specialising in Greek myths. And her favourite is that of the Minotaur in the Labyrinth.

Personally, I both admire and love how Skye uses this tale as symbolism throughout the entire story. Its like Avery’s entire thought and handling process revolves around this myth, and as she learns more and more, she realises that the face of the Minotaur might not be the one she originally gave him.

Right, I know I’m sharing a lot of quotes, so I’ll just share one last one:

It’s the Minotaur himself who holds my fascination. The child of Pasiphae, Minos’s wife, who fell in love with a beautiful white bull. From their union came a child. A monster in every sense of the word, the Minotaur was banished to the Labyrinth and fed on sacrifice alone. Was the Minotaur some wild historical figure, distorted by the lens of superstition and poetry? Or was he the dark side of King Minos himself, the bastard child born of jealousy and greed? These are the questions that plague me while I curl up in the giant armchair, the fire growing dim.

This quote is what my inner Greek Mythology fanatic found most intriguing. I mean, its a pretty interesting and amazing theory. I wish I had considered that, when I wrote my University special on Greek Mythology.

I want to take a quick moment to talk about why I couldn’t rate this book at 5 pawns. Because as much as I do like it, and as quick as I did turn the pages, I cannot bring myself to do so. And here’s why:

♟️ Avery knows literally nothing about sex. I’m not against her being a virgin, that’s fine. But she still doesn’t even know the basics. For her its unthinkable to have sex at other times than when you go to bed at night, which is just too  dumb for me.

♟️She refers to her dad as “daddy”. I know this is probably meant to show her innocence, but to me it comes across as annoying. By age she’s an adult, but most of the time she doesn’t behave much better than a teenager.

So now that you’ve read my very long review, I’d love to hear from YOU. Have you read this book? Or anything by Skye Warren? Does this seem like a book you’d enjoy to read? Or do you have any other thoughts you’d like to share? If so, let’s chat in the comments!

If you want to, you can buy the book for free with my affiliation link: