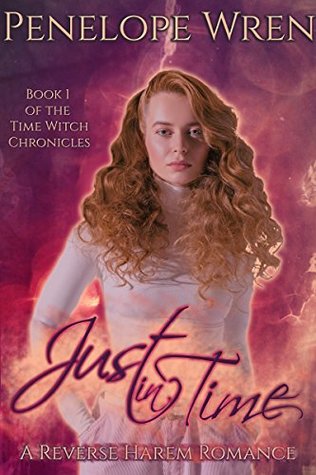 I received an advanced copy of this book, via Booksprout, in exchange for my honest review.

I’ve prided myself on living a quiet, ordinary sort of existence. Sure, I’m a witch with extraordinary time-altering powers, and my boyfriend’s a shifter without a pack, but we made it work. And we were pretty good at it, too.

But all of that changed when I woke up one morning and found my boyfriend fading away — quite literally. And now I have to use those time-altering powers of mine to figure out what’s happening to him. And to, you know, unfade him.

That leads the two of us back to 1987, where we find another shifter with issues, and huge rips in time that only I can fix. Seems like I’m a magnet for trouble. And shifters. Not that there’s anything wrong with the latter.

Oh well, maybe my boyfriend’s “packless” problem won’t be so much of a problem anymore?

A steamy (eventual) Reverse Harem Romance with wolf shifters, time travel, witches and evil plots. Lily Barclay is a witch with time altering powers who starts out with Brody, her wolf shifter boyfriend, only to add on more shifter boyfriends in every installment of the series.

Just in Time is the first book in the ‘Time Witch Chronicles’, a new Reverse Harem series by Penelope Wren.

When I received an email saying that this book was waiting for me, I was SO excited. The first book I read by Penelope Wren, Unsuitable wasn’t all that great. The second book, Locked, was absolutely amazing. So, I had high hopes for this one.

I’m not exactly able to pin point where it went wrong! Maybe it’s the fact that the book is so short, its not that the plot felt a bit rushed, it’s more that I didn’t feel like I got to know the characters. Which for me meant, I didn’t really feel any chemistry with them. You know when you browse through a catalogue, and all the clothes look fine on the pages. But then you go to the store, and the colours and stitching is off. That’s how I felt about the characters in this book. It was like they had all the right things, to make them awesome. But somehow, somewhere along the line, I couldn’t connect with them.

I didn’t fear for them, root for them, or care much one way or another. What kept me going was the plot! I need to know what happens next. As of now, I’m not hugely concerned whether or not the characters make it, but my curiosity demands satisfaction. For me the lack of connection to the characters is a bit of a deal breaker, as I love and need to feel their emotions.

Though, with that being said, the plot is extremely promising. In that aspect I think this was a great first instalment in Penelope’s new series! So I’ll be awaiting the next book, and I’ll definitely be reading it.

Do you read reverse harem books? Or books about paranormal beings and maybe even time travelling? Does this sound like something you’d pick up? Let’s talk in the comments.