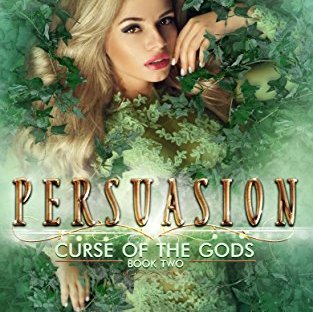 Persuasion jumps right back into where Trickery finishes. Life is definitely not getting anymore boring for Willa and her five Abcurse brothers:

As per normal Willa gets herself into a lot of weird, bad and humiliating scenarios but luckily, the five brothers stand with her. She continues her craziness and weird inner monologues, which I actually liked a lot more in this book. Unfortunately, this book is really hard to rate as the plot takes a bit of a backseat on this ride, to make room for character interaction. Usually I don’t mind that, and I didn’t at first, but considering that the actual storyline doesn’t really pick up until around 35-40% it was a bit too much.

“Hugging is flirting?” I asked, my voice muffled against his back. “I didn’t start this. This isn’t my fault. It feels nice to touch you guys because you kidnapped my soul. I’m actually hugging my soul right now. This is a private moment. Butt out.”
― Jane Washington, Persuasion

I absolutely love the five Abcurse brothers, especially Siret (yes, I enjoy a sense of humour and a good prank), so to me if Willa hadn’t been there, I’d probably rated the book at five hearts.

Personally, I do like that Willa is not your typical heroine, she’s clumsy and dangerous to herself and those around her. Even though, she’s not really capable of fighting her own battles by merit, she has the drive and desire to stand on her own 2 legs and draw her own lines in the sand when enough is enough! Yes, I do feel her inner monologues do get a bit out of hand, and so does he entire nudity thing but hey, compared to book #1 I love her in Persuasion. What I didn’t love, actually got pretty fed up with, is the amount of time spend describing that Willa and the brothers are hugging, kissing, accidental rubbing etc. it’s too much. Willa is not a minor so I’m not sure why it’s developing so slow? However, at this point it feels more like teasing than anything else. So hopefully the romance part will either move forward or stop in the next book.